I’ve finally managed to knit something!! I’ve knitted three hats for the Innocent Big Knit event which aims to raise awareness and money for the charity Age UK 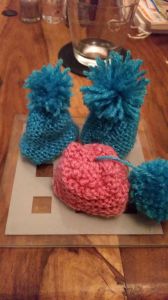 These were made using Innocent’s basic hat pattern

I’m hoping to make at least another three before the deadline in December. These hats are then put on Innocent Smoothie bottles in shops and a donation is made to Age UK for every bottle sold with a little hat on them. Follow Innocent Smoothies on Facebook to see some of the amazing and creative other hats they’ve received!