So in my continued quest to DIY as many of my presents as possible I made a tea wreath!

I was originally inspired by this tea wreath but decided that I couldn’t be bothered with all the clothes pegs! I went with double sided sticky tape instead.

You can use any tea you like to make this, just make sure you buy tea that comes in individually wrapped packets (usually this means buying the nicer, more expensive ones).

40 teabags in any combination of colours and flavours

Thick cardboard or foam board

I started by putting a standard dinner plate on the back of some flimsy cardboard from a pizza and drawing around it. I cut this out and then marked the inner circle with the base of a bowl. I used a wooden clothes peg at this stage to make sure there was enough cardboard for a decent layer of teabags.

I then used double sided sticky tape to attach my cardboard doughnut to some foam board I had lying around:

Then carefully* cut the foam board to match the cardboard using a craft knife.

*Confession: Not that carefully because I did this really late at night and I’m an idiot so I thought I’d nick my finger:

2. Lay your teabags around the wreath and work out where they look best:

3. This would be a good time to attach your ribbon to the wreath (I didn’t consider this until later and had to attach it to the back.)

4. Attach a ribbon to the back of the foam board using staples and a glue gun if you haven’t attached it at step 3! 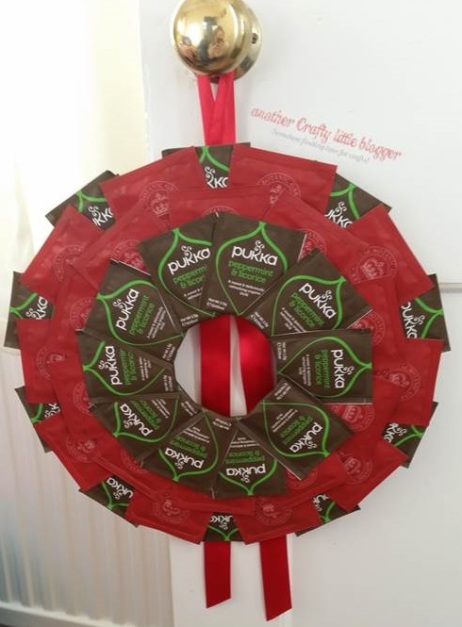 This probably took me about an hour and a half from start to finish but makes a gorgeous and thoughtful present.

Continuing the Christmas DIY gift lists, these are my 10 best DIY gifts for so called “geeks”. Really this is just a chance for my fave Fandom based DIYs to shine! So this tutorial isn’t actually Dr Who themed but it was where my brain went immediately when I saw it. I would theme it with a white checked shirt and add braces to make it even more Dr Who themed. Add a photo of you and your geeky friend for the perfect, personal gift!

This looks awesome and the perfect gift for the Batman fanatic in your life!

This tutorial is aimed at making multiple wands for a Harry Potter party but there’s nothing to stop you making one for your geeky loved one!

The perfect addition to any Whovian’s Christmas Tree.

I don’t even think this needs explanation… amazing.

This is amazing, I want this, who wouldn’t want this? The potions actually do things (spoilers, it’s basically a science experiment wrapped up as Harry Potter which I LOVE.)

Practical and geeky. Wins every time!

Gotta catch ’em all! Perfect DIY for the Pokémon fan in your life! 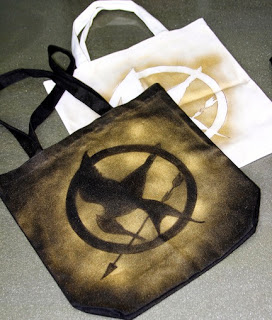 May the odds be ever in your favour when you make this awesome tote bag!

Pin this for future reference: 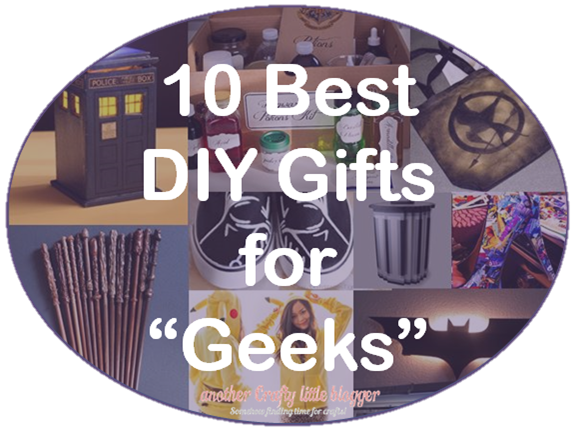 It’s October, that means there are only 11 weekends until the big C word… Christmas! If like me, you prefer to make gifts rather than buy them, then that means starting now. Unfortunately, my full time job gets in the way of crafting all day, every day so every weekend between now and then will need to involve some craftiness to get everything ready by Christmas. The last couple of years I have been horribly disorganised so this year will be different!

I’ll be posting DIY gift lists for different people in your life over the next couple of weeks as inspiration!

Here are my 10 best DIY gifts for the men in your life:

I’ll be attempting this one soon, check out Facebook to see how it goes! 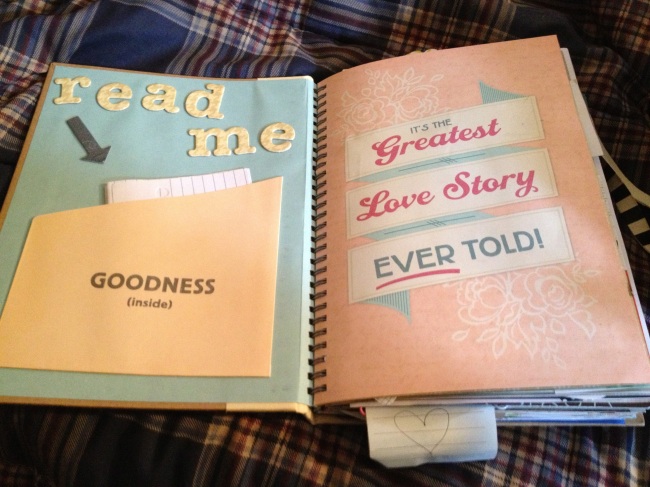 This one is so good, I pinned it twice… I’ve been saving things to scrapbook for ages so this one might be on the cards for Christmas or possibly our anniversary since that’s in January!

Because organisation is more fun with Lego!

Because literally everything is better with bacon.

For the Comic Book lover in your life. This principle is easily applied to other fandoms/geekiness 🙂 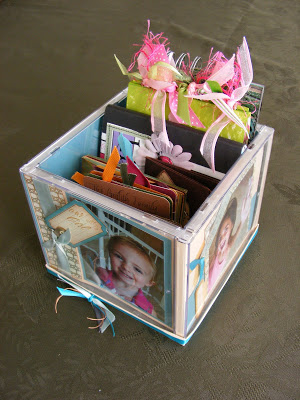 I made this one for my Dad using old mini-disc cases (who remembers mini discs?!)

7. Make him a Nut and Bolts Chessboard:

Does he love chess? Take a trip to your local DIY store to get everything you need.

This project is the perfect amount of fun for you and cool for him!

For the chef in your life, these rubs look great! This tutorial even includes free printable labels. Ikea have some great spice jars for this project.

And finally if you’re strapped for cash, one of the best home made gifts is the gift of food! It’s easy to make it look nice with ribbon or these pretty bags from Lakeland.

Now I’m off to indulge in a Lakeland spree to so I can make chocolates for my extended family!

I know, I know, it’s September, it’s horrifying that there are already Mince Pies in the supermarket. However, one thing I cannot recommend enough is to start budgeting for Christmas now. Actually I’d recommend budgeting for Christmas all year round to avoid a skint January and February but if you haven’t done so yet, it will still help to start thinking about it now!

Now, lots of people will think I sound like a massive misery now but the reality is that Christmas is just one day of the year. It’s never worth getting into serious debt in order to buy the most expensive presents for everyone in your life.

Christmas comes but once a year but it does come every single year and it is more than possible (and frighteningly easy) to get into serious cumulative debt every year to try and have the “perfect” Christmas.

Call me old fashioned but I think Christmas should be about time spent with loved ones not who spent the most money on whom.

To this end I’ve devised a Christmas budget spreadsheet.

You can download it here. There are full instructions on the first sheet and different sheets for different festive expenditure. Use it, see if you can afford your planned Christmas now and adjust if necessary. Be totally honest about how much you’re likely to spend at Christmas parties (i.e. if, like me, you work in Publishing don’t budget £10 for drinks at the Christmas party! You know you’ll be spending potentially three times as much so be honest!)

If after doing this you realise that you can’t afford to buy everyone in your extended family a present, consider DIY gifts that you can make that keep you within an affordable budget. I made Chilli Jam for my extended family a few years ago for less than £3 a jar, which was good since my Mum is the youngest of ten!

I will be posting a DIY gifts series in the run up to Christmas but you can start planning now. The other thing I do all year round is pin gifts to my Pinterest Gift board that I can look at before people’s birthdays and Christmas to plan things I could make for them.

Be creative with your planning this year and avoid the January money blues!

For more great ideas on how to save for Christmas or any other finance advise check out Martin Lewis’ website: www.moneysavingexpert.com

I figured I’d start by sharing some of this year’s successful projects, since it’s nearly 2015! This year has been incredibly busy for me in terms of work; I’ve completed my green belt in Lean Six Sigma (project management) on top of my usual day-to-day role which has been much harder as we were two team members down for a large chunk of the year!

I still found time for these little projects though:

1. A “Puntastic” thank you present

This was a gift box I put together for a friend and colleague who helped me massively during my Lean Six Sigma qualification; crunching data for me and being a sounding board when I was getting increasingly stressed and mental.

As we both love puns and wordplay I put together a box of mini presents to say thank you. I wrapped a box in wrapping paper inside and out (wish I’d seen this tutorial before for the inside!)

I hit the jackpot in Tesco as I found present tags shaped like speech bubbles. I have saved the leftover ones and will likely trace around them in the future!

I started with some Krispy Kremes and added a tag saying I “doughnut” know what I would do without YOU!

I was putting this together just before Halloween so I couldn’t resist the eyeballs chocolates: 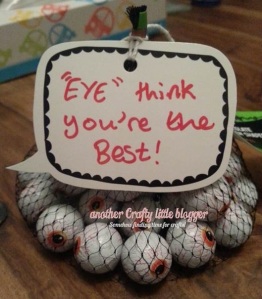 I found a lovely large latte mug (Sainsburys) for the classic “Thanks a Latte” pun. I didn’t get a picture of it but I also got a £10 Starbucks card and squeezed it inside the mug. 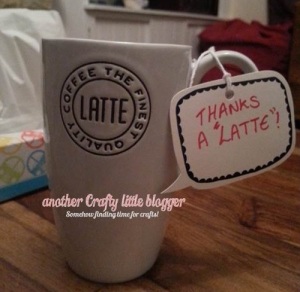 Everyone loves a moustache! I found this moustache pencil topper in W H Smith’s while I was waiting for my housie to post something. “I moustache you for the secret of your awesomeness” sounds best when said like Sean Connery! 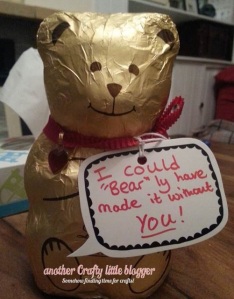 My friend is a major fan of Lego so I got her a Lego key ring torch (also Sainsburys). Superman since she saved my sanity on more than one occasion! Also I liked that it created a double wordplay/pun opportunity: 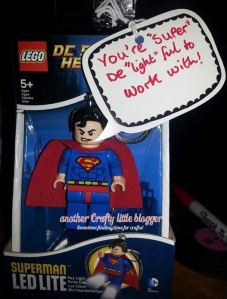 And here is the final present:

I hid it in my car, waited until she had gone for the annual office flu jab and put it on her desk for when she came back.

I think she likes it!

2. An impromptu Alice in Wonderland Costume

Our office decided to have a charity dress up day. As I’m the social committee floor rep (don’t ask me how that happened!) I felt I definitely had to get involved. I had a blue pinafore dress already so I decided to improvise by getting a white blouse and make a white apron from some scrap material:

I essentially sewed a sealed pillowcase and attached two strips as ties:

Last year’s christmas party was also Alice themed so I had a big bow headband to wear. My final outfit was topped off with stripy socks borrowed from the housie: 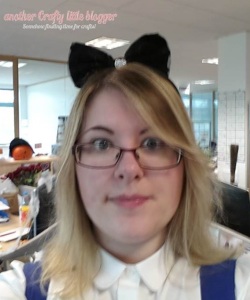 I also made my first foray into nail art:

I used this tutorial for the white square decals on my chequerboard nails, pinky and thumb nails. The heart and bows were done with a sharpie (I know, but it was gone midnight by the time I finished!!)

It turned out our team were some of the few to get properly dressed up but we raised lots of money nonetheless:

Yes that is a puntastic “Dumble-Door” on the end there!

I failed to get pictures while I was doing this one but I have the final product:

They looked good on Christmas day! 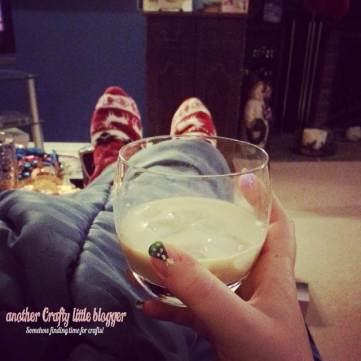 I’ll be making a build your own fort kit (based on this tutorial) for my cousin’s kids over the next couple of days so I’ll be back with a British version of the tutorial on it soon. I’m babysitting for the kids on New Year’s Eve so hoping to have it finished by then!